In the early days of 2018, the Environmental Committee of EFEE undertook a detailed comparison of the large differences between blast vibrations standards throughout the world. The project was inspired and lead by Mathias Jern (Nitro Consult) and Johan Finsteen Gjødvad (Sigicom) who were able to draw upon their thirty plus years of consulting on vibration monitoring. 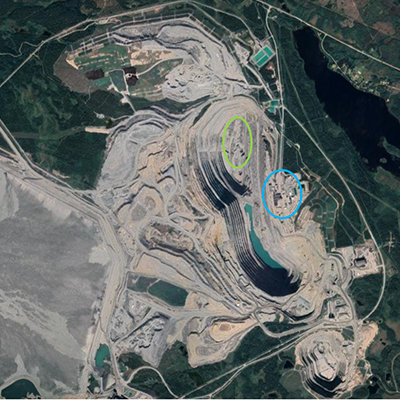 Figure 1: Arial overview over the Aitik mine in northern Sweden, the green ring indicating the approximate area of blasting and the blue buildings for possible monitoring.

First phase of the project

In the first part of the project, national vibration standards were compared using a survey combined with interviews of professionals in the field around the world. Results were presented at two conferences, namely the EFEE conference in Helsinki 2019 and the ISEE conference in Denver 2020. The first part did not conclude but rather observed and compared details. One of the main findings was a confirmation of the huge difference between the different standards. These differences included the wide differences in both restrictions and how the issue is addressed through measurement. The observed differences were quite substantial, confirming that the different national vibration standards vary a lot when it comes to the allowed vibration levels. Allowable vibrations levels vary by up to a factor of 10 for the exact same blast. There are also large differences in where the monitors are placed, which directions that are monitored, which frequency content are recorded, how the dominating frequency of the vibration is determined etc.

Second phase of the project

The described differences create challenges in comparison of results from vibration monitoring between different countries. How can such differences be explained and/or defended? It is obviously a problem from an academic perspective but also from a practical view in a more and more international world where both blasters, consultants and contractors work all over the world and hence must address the problem of vibration from blasting in different countries with different standards. Such large differences also challenge the standards of correctness. 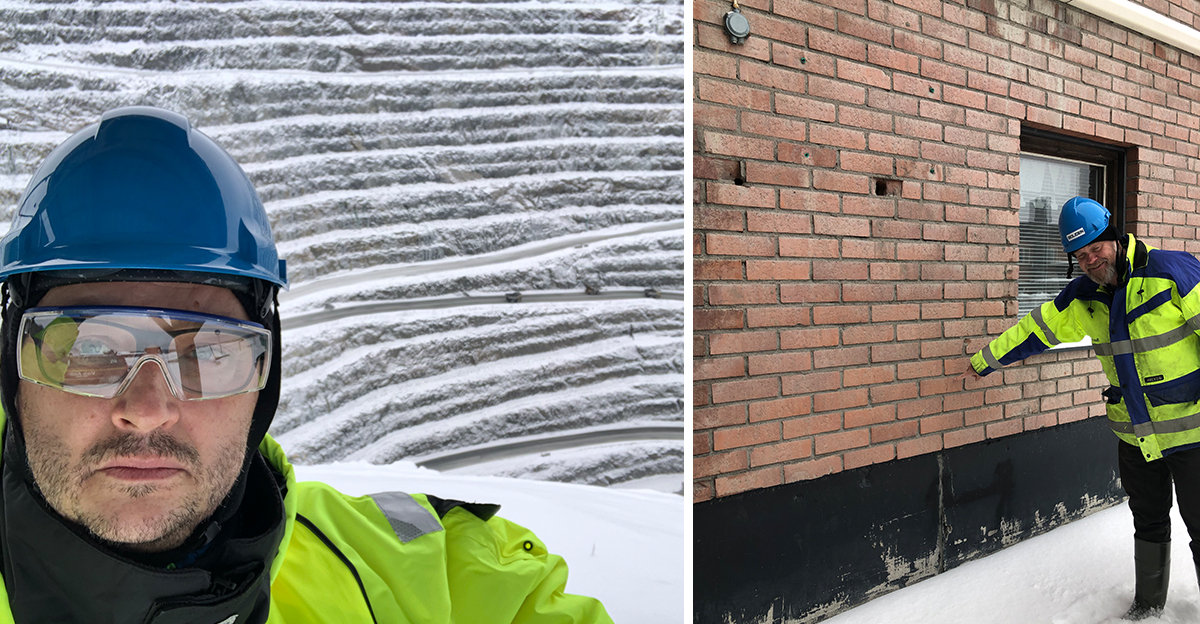 Figure 2: From the left; Johan and Mathias during visit to the Aitik mine test site.

Objectives of the different standards are not fully known. The way a standard is written is in its nature normally limited when it comes to background, history, and explanation of the content, hence it’s almost impossible to grasp the full reason for these large differences. Where possible this historical context will be compared but most importantly the actual differences will be compared.

The aim of the second part the EFEE project

The aim is to measure vibrations from blasting using some of the representative national standards to be able to compare them properly.

Initially the standards that will be compared are USBM (USA), BS (UK), DIN (DE), SS (SE), Decree of 22 September 1994 (FR). The compared standards represent the most used stands in the world or standards that are representative for a type of standards in a region.

A guidance committee of national experts, with knowledge of the use of and developmental history of their standard has been assembled to oversee the second phase. They are involved to guide and validate the methods of monitoring and data analysis are correct. The aim is not only to base the monitoring on what is described in the standard but also the actual practice in the different countries.

Monitoring will be performed by mounting equipment according to the normal practice of the different countries guided by the national experts connected to the project. In addition to comparison of measured response to allowable excitation, building response will also be measured through three methods. First is the traditional comparison of upper story response to the ground excitation. Second, building strains will be calculated from relative building displacements measured in two locations. And thirdly crack response will be compared to both blasts induced ground motion and climatological effects to determine the relative importance of the measured response.

Apart from the data which is to be collected during the project comparison will also be made with results from a similar Norwegian study by Norwegian Geotechnical Institute, which is mainly focusing on the Norwegian standard.

Since these tests will not involve direct observation of cracking, two other building performance measures will be employed. Stain is being monitored because it is judged by many to be the parameter which most directly relates to material sensitivity by physical principles. Crack response is being monitored because no measurement is either large or small or good or bad without comparison. This as strain judged by many is seen as a good unit to monitor the well-being of a building or structure. Strain is a good common indicator which can be used to challenge the results from the standards. This as the results of the standards this way can be compare to the actual material properties of a structure.

Status of the project

Until now two online workshops have been completed. The initial workshop gathered the experts, presented how the project was planned, the standards to be monitored by and compared, the equipment to be used and the planed site for monitoring.

Figure 3: Screenshot from the workshop, where participants from around the globe are giving input to the project

The second workshop awaited a site visit to the open pit mine where the monitoring is to take place. Namely, Europe’s largest open pit mine the Aitik mine. The discussion was focused on proposed positions for monitoring and alternatives. The Aitik mine is situated North of the Polar circle close to the Swedish town of Gällivare.

The project is very thankful that Boliden have let us monitor on their mine and have been very well guided and assisted in the mine by our contact Mr. Torbjörn Krigsman. Finally, the Second workshop included a presentation by Mr Syed Alley Hassan, from Luleå Technical University (LTU). Syed presented his master thesis, which will be part of the EFEE vib2 project. EFEEs Environmental committee and the project are grateful to LTU and Professor Daniel Johansson and Dr. Chanping Yi to establishing the contact to Syed.

Vibration monitors will be placed on the foundation of the selected building, in the soil in front of the building and (if possible) on the top floor of the building. In addition, if possible, crack sensors and velocity transducers for strain calculation will also be placed on the selected building blasting area. Several blasts will be monitored. Monitoring will be done with Sigicoms instrument C22 which has the ability for GPS-clock synchronization between the monitors. This ability also gives the opportunity to analyze relative displacement, wavelength, and strain in the structures. The project is grateful that Sigicom has promised to provide both Geophones and crack-gauges to the project.

If you want to know more about the project you can contact either Johan Finsteen Gjødvad or Mathias Jern who are responsible for the project on the behalf of EFEE.

This article was originally published in EFEE Newsletter, December 2020.